On the 18th December 2020 a fire caused damage to the Joondalup Sports Association. Thankfully nobody was injured but the changing rooms suffered a great deal of damage. The fire started in the Cricket club's storage room and quickly spread the changing room area via the roof space.

The changing rooms are currently closed for repair and the most recent update we have received from he City of Joondalup is as follows;

The damage in this area is much greater than initially thought. As a result, the ceiling, gables, tiling and fittings are all required to be replaced.

Demolition works have commenced this week and repair works are expected to take approximately 6-8 weeks.

As a result, these changerooms are not expected to be available for club use until late March (final date subject to confirmation).

Demolishment works will commence in this area in the coming weeks.

As a result these changerooms and storage areas are not expected to be available for club use May (final date subject to confirmation).

Updated timeframes and confirmations of final dates will be provided when possible.

From above we envisage that the eastern dressing rooms will open before our season commences. With the 2 Western rooms potentially not opening for a few weeks after the start, we will stagger KO times to ensure all teams have a changing room availablilty prior and post match.

Joondalup City FC are pleased to announce that Nigel Smith has been appointed as our new 1st team coach for the 2019 Season. Nigel is a former pro football player, serving his apprenticeship at Leeds United FC and has been under the coaching influence of English managers in John Bond and Howard Wilkinson also competing against the likes of Ian Rush, Peter Beardsley and Ryan Giggs. Nigel turned to coaching after a successful senior playing career in the UK gaining his UEFA coaching accreditation with the English FA before emigrating to Australia.

JCFC acknowledged Nigel's coaching qualities during his time spent as an assistant coach for the latter part of the 2018 season with our Senior State squad expressing his desire to work closely with the clubs Technical Development Team to further implement our "Football Development Strategic Plan/Vision" promoting a clear pathway for youth into senior football.

Nigel & his coaching team are eager to get started & welcome all present & new players to their pre season sessions beginning in November, Dates TBC , where they will introduce their ethos & philosophies in working towards an attractive entertaining brand of football in 2019. For any further information in regards to our Senior State League program, in confidence contact our Technical Director tdteam@jcfc.com.au

JCFC 2016 SURVEY RESULTS
Many thanks to the 266 member respondents who completed the recent survey. All the data has been processed and will be used in the currently running Strategic Planning exercise.
To view the result of the survey please click here..

Another Senior Trophy for JCFC...more here..

Ever wondered what we do with the old kit?

Recently we teamed up with the Rotary club to look at how we might find a good home for our old kit. We were delighted to find out that a group of dedicated school leavers embark on a 'Leavers' journey a lot different from what we would all expect. The team of 'Leavers' set off to Timor where they help out local communities in whatever ways they can. In this instance they filled their backpacks up with our kits and carried them to those children less fortunate than most.

See the pictures and short write up below – it appears that the timing couldn't have been better. The next run, next 'Leavers' will likely focus on football boot donations…watch this space for more details and how you can help in the future."

Fiona McFarlane, the Team Leader for the Rotary Timor L'este Leavers program, accompanied the team of 14 school leavers from Kalamunda to Timor L'este in December 2015 and presented the team with playing shirts donated by Joondalup City FC.

Fiona commented..."The football jumpers were a great hit and very much appreciated - just in time for the "Hauba Soccer Championships" which kicked off on the 9th December. The assistant to Timor Leste's President was there to start the championships off - she was most impressed with the generous donation." 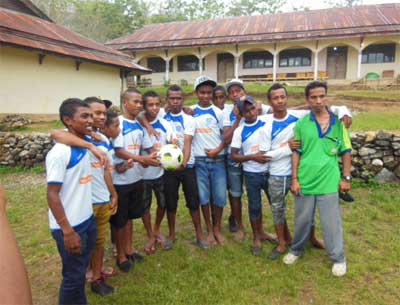 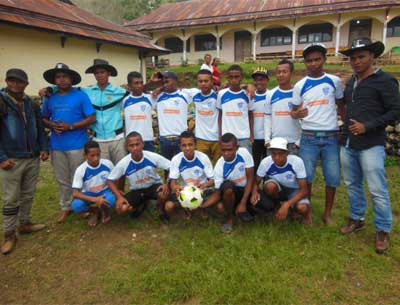 We are looking for guest contributors to our website - writers 'on the ground' to create short articles that would be of interest to our players, members & supporters.

You can write on anything from match reports, player & team achievements, game previews, club gossip & rumours – we want it all.